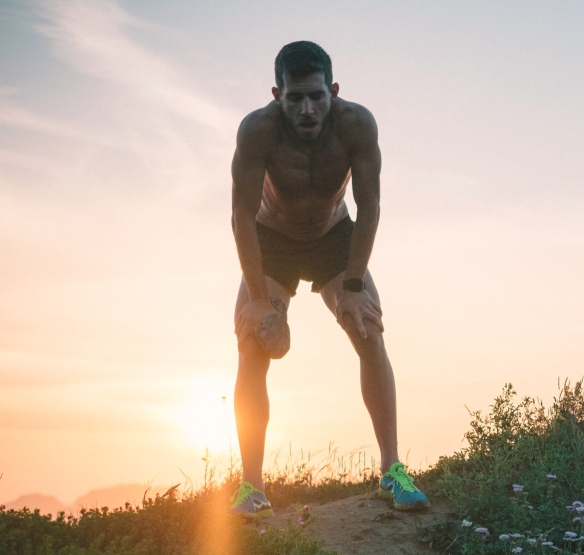 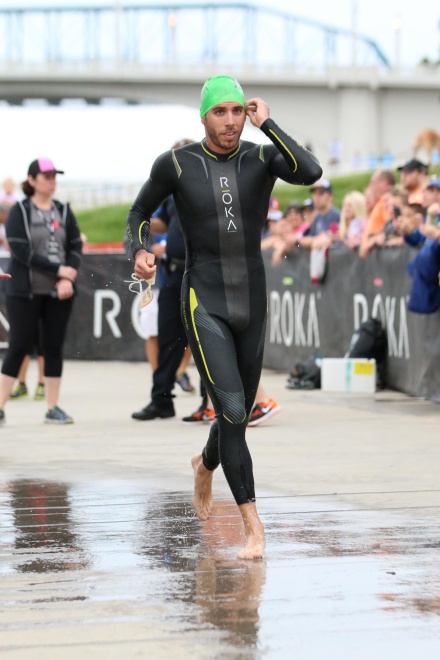 All smiles as I exit the swim one minute back from the leaders, a first and the setup for a brand new style of racing for me: the hunter becomes the hunted.

It’s easy to look back at a race that was lost by 1min 5sec and find that time across the four disciplines of triathlon (swim, bike, run and, of course, transitions):

if I’d acted with a little more purpose in transition…

…perhaps I could have lifted the tape at Ironman 70.3 Chattanooga.

But, after vomiting and peeing my pants (you’re welcome), each whilst continuing to run, one thing I knew as I exhaled at the finish is there was no lack of will to go for the win. And after crumbling at Oceanside and a mechanical at Santa Rosa, I’m so happy about getting a chance to race as well as I could and even have the opportunities to make, and learn from, those small mistakes in a third place performance.

At mile 2 of the run, I found myself in the lead of the amateur race, with nothing to do to play to my strength and try to hold, and hopefully extend, my lead. The hunter had become the hunted and the feeling was totally foreign. My racing career has been spent turning myself inside out to chase down stronger swimmers. The swim in Chattanooga was shortened from 1.2mi to 0.8mi due to storms the night before and I came out within a minute of the front group, in the thick of things immediately.

After settling in for a 56mi bike ride, at mile 10 I grew frustrated with some of the gamesmanship happening in the group I was riding with. I decided to put my head down for five minutes and ride all out, which worked and I was in the clear to make my way throughout the rest of the field by riding hard and trying to stay as aero as possible, something I’d worked on lately.

And as I cruised into transition, I got a position update from teammate and race Sherpa for the day, Jordan Bailey: third, behind teammate Reid Foster and another athlete. Reid is such a strong biker so when I saw him at his rack upon racking my bike I was stoked that I had ridden well.

I gulped a Red Bull and charged out the gate for the half marathon, admittedly a little stiff from riding hard. Shortly after mile 2, I found myself alone in the lead.

No spectators on the back part of the course, no other athletes around. I made the call to hold the lead instead of going gang busters. Little did I know, there would be no busting of gangs, even later when I needed to.

In probably my worst decision of the day, and certainly out of fear of an Oceanside crampfest repeat, at mile five after the first twitch of my left quad, I decided to take a Hot Shot, something I’d never drank before, but known for stopping cramping before it begins. Within thirty seconds, I felt an overwhelming heat come over me and my body slowed beyond my control as I began to wretch. My body totally rejected the supplement, made with natural ingredients like lemon juice and cayenne. This isn’t a knock on Hot Shot, and I usually can eat or drink anything and continue, but I definitely shouldn’t have tried something new on race day. At least the two guys in the parking lot who saw a guy running and vomiting have an awesome story now…

Bouncing back from that over the next mile was really a struggle, especially up a steep hill. My thoughts passed through fear, doubt and uncertainty, but ultimately I was able to pull myself together, regain focus and begin running a somewhat respectable pace again.

There are several U-turns on the course that allow you to see how far behind competitors are. The first lap ended and while I was still in a decent lead, realizing my run goal time was out the window, my objective was to run well enough to win. That became a challenge at the U-turn before mile nine when I saw teammate Kevin Denny inexplicably had closed the gap by about a minute.

In an instant, the race changed. I began to run harder but it wasn’t long until he caught and passed me. I tried to hop on, focusing my gaze between his shoulder blades and hold the pace but it just wasn’t there on Sunday. He clocked a 1:16 and I did everything I could to hold onto a 1:19 for the win, ultimately finishing with a less 1:20, less than a minute behind Kevin overall. I gave KD a big hug at the finish line, congratulating him on a well executed race and the victory, before finding out someone who’d started later beat him by 8 seconds, shifting Kevin to 2nd and me to third (there seems to be no easy way to race head to head in amateur triathlon other than a mass start).

Hydration half an inch away at all times

If you hold up two 1s, that is the same as holding up a 2 and it looks cooler (except I got bumped to 3rd)

What can I say? The decision to fly out to Chattanooga after pulling out of Santa Rosa was a success. While I’d loved to have won, I believe a winning performance was in there somewhere had I executed better and that’s really encouraging. What’s more, fifteen guys on Team Every Man Jack from across the country got to spend time training, racing, and eating (a lot) together. And finally, I can’t say enough about Chattanooga as a venue. The bike course is one of the best I’ve raced, Ironman Village is settled nicely along the river, and the run is super honest. I think it’s going to be a really phenomenal World’s venue in September.

Thanks to the inner circle who emphasized flying to all the way to Tennessee last minute to race was a good idea, to sponsors for the gear to get me to and through the race, teammates for pushing each other to the edge and friends and family for the kind words.

I’ll leave you with six “things I learned” and, as always, one #badracepic. 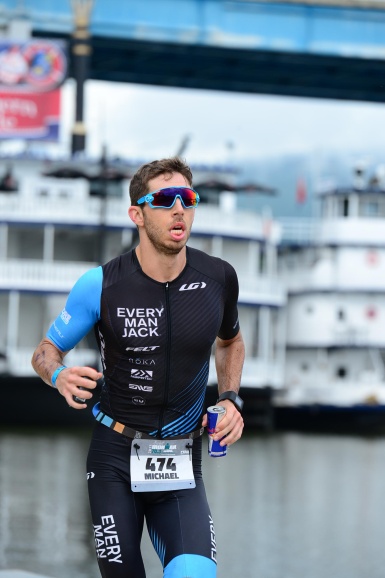 A series of stories & tips about training & traveling. 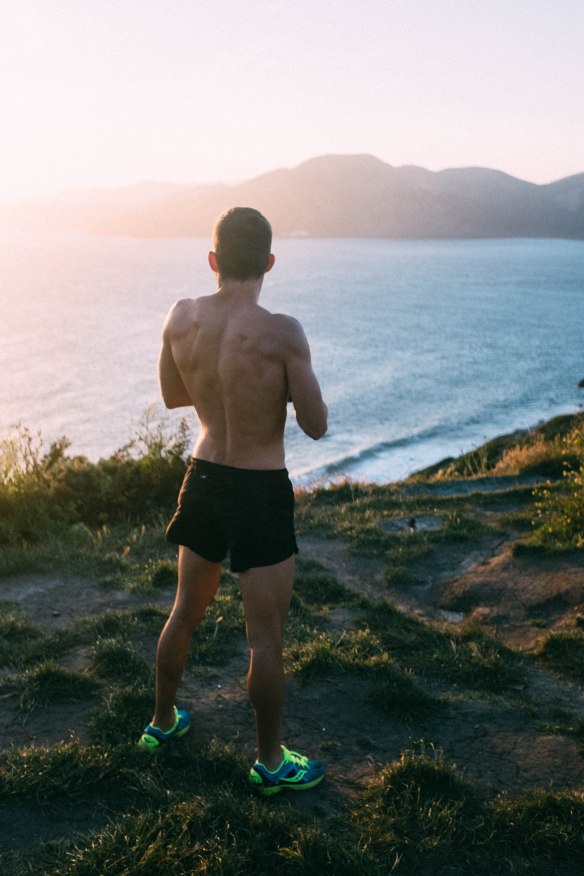 Four miles from my house in the heart of The City. It’s easy to draw inspiration in San Francisco.

Travel is great for so many reasons –  expanding our perspective, trying new things, learning about other ways of life, adventure or relaxation. But sometimes the best way to recharge is with a solid staycation. And that’s exactly what’s on tap for Travel Tuesday this week.

I’ve lived in San Francisco for over seven years now, as many years as square miles in the city. I’ve covered most of that by bike or foot and let me tell you, a lot happens in that 7x7mi space. World class parks, like Golden Gate, Presidio and Crissy Field, provide a wealth of gorgeous outdoors almost impossible to imagine in the midst of the hustle and bustle of the city.

And that’s precisely why there’s no reason someone visiting San Francisco should go for a run in a stop light interrupted, overcrowded street outside their hotel. Heck, sometimes it’s easy for residents to fall into their routine and forget how fulfilling it is to run in these parks!

If you have time for one run in San Francisco, incorporate the Golden Gate Overlook on the Coastal Trail into your mileage. I recommend this because if you run shorter distances, it’s easier to park a rental car or get a Lyft to the Golden Gate Bridge parking lot. If you’re looking for a longer run, it’s a 5mi one way from Union Square via Crissy Field. My favorite is to start from gate at Presidio and Pacific and enjoy The Presidio on one of its signature mystic mornings. I’ve linked that route here:

While it’s true that the views and San Francisco are tough to beat, anywhere I’ve lived or traveled to, I’ve found favorite tracks that put my mind at ease as I cruise through. What are some of your favorite “back pocket” runs in your hood? Leave a reply below! 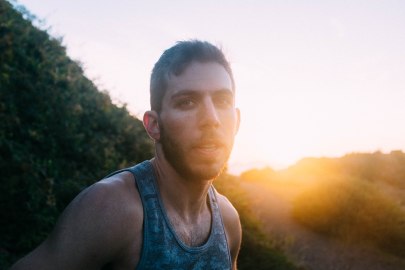 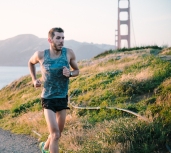