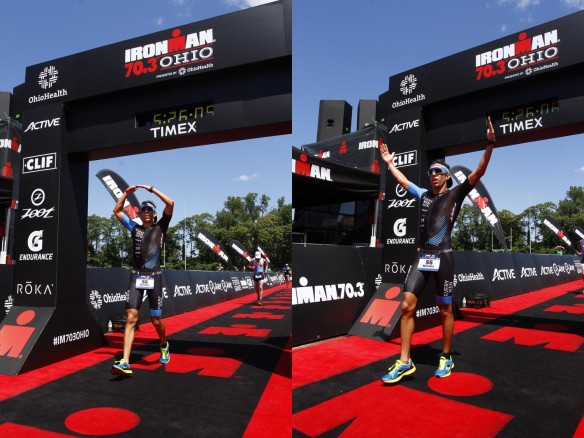 You know that feeling when you’re FAF (fit as…) heading into a race, you’re healthy and you just know you’re going to crush it? That’s just not how I felt leading into my bid to defend my title at Ironman Ohio 70.3. I wasn’t UNfit for UNhealthy and if you asked me before the race, I would have told you I was “fine.” But a couple bouts with illness and one or two niggles leading up to the race definitely axed some key sessions that would have helped not only fitness, but confidence.

And what better way to get over a case of the “maybes” than a little home cookin’?

The race venue is twenty minutes from the house I grew up in. What makes this race so special is not only the course familiarity, but the unwavering support of my family while I’m home. There was not a single thing that wasn’t covered from the second I landed at Columbus Port International, all the way to the start line, where my dad zipped up my Roka wetsuit. And it was that extra energy I would have spent on logistics, food or other details, that I was able to use in getting my mind and body right.

By the time I was wading in the water with the rest of the guys waiting for the gun, I was…how do they say, “finna to get after it.”

Unfortunately, Ohio 70.3 decided to go with a “wave” start again this year. Of the four 70.3’s I’ve started this year, this was the first that hadn’t converted over to a self-seeded “rolling” start. My wave was the second to last wave, starting an hour and twenty minutes after the first folks. I’m hoping all races eventually convert over to the rolling or seeded start – it’s safer for everyone and allows more pure competition.

As such, we had a lot of traffic by the time we started our swim. Coupled with the blinding sun which had risen well above the treeline by then, there were people stopped everywhere. So while I started swimming with a guy who had a good pace and line, I lost him in the madness about 600m into the 2km swim and ended up swimming alone.

While I swam 30min for the first time in many races, I’m really encouraged to know on a day with clean water it would have been 29min and with a good group, 28min was within reach! This speaks volumes to the work I did with Gerry Rodrigues of  Tower 26 in LA, something I’m going to write more about soon.

Fun fact about the bike: I rode exact same time as last year. Like, to the second: 2:12:33. This year’s ride had far less turns than last year’s course, which had something like 35 turns in 56 miles (!), with a headwind on the way out and a tailwind on the way back. This means I was more easily able to smooth out effort, focus on gearing, nutrition and hydration, to set up a strong run.

I was caught around mile 45 or 50 by a strong rider who came out of the swim a couple minutes back. We hit transition together and I was expecting the race to start there. However, I must have made it out of T2 before he did because I didn’t see him again.

Last year, I remember feeling like crap within the first two miles of the run. It was little less humid this year, but I also think that up to that point in the race, the energy burn had been pretty even allowing me to feel the rhythm. I clicked away at 6:00ish pace give or take knowing I was going to have that pace all day, but I wasn’t sure if I would have that extra gear to run faster.

In my own assessment and after finally hearing a position shout out from the crowd I knew I wasn’t going to have to dig deep to run much faster, which was really a relief. My strategy was to “not do anything stupid,” i.e. hold the pace.

And unlike last year, when I was pretty dehydrated hitting the finish line, I was able to really enjoy finishing on the OWU track and even fired up the crowd a little bit, finishing with nothing other than the “O-H…” arms.

After the race, I rode my bike 45min home to flush out the legs and got ready to host my Watterson buddies for a classic Ohio summer cookout. Frankly I was looking forward to that just as much as the race.

I’m really excited about this race. Dropping almost 7 minutes off my time last year and getting a PR at the distance in 4:06:08 is the type of positive feedback on your training that you hope to get out of a race. But what’s the most exciting is that I know I can go faster. And this isn’t a “woulda, shoulda, coulda…just be happy with your time” kind of faster. No, cleaner water on the swim (i.e. rolling start), a couple mechanical changes on the bike, more run training now that my swim block and illnesses are behind me. I really believe I can break four hours on that course. And that pumps me up.

Thanks, as always for reading along and a massive thank you to anyone who expressed kind words before, during or after the race. Thank you to my parents for being the best race support, my brother and friends for completing my trip and hanging out after the race, and Dani who was texting everyone like mad with updates from time tracking central command (i.e. her MacBook). A big shoutout to my teammates who had blitzed Ironman Santa Rosa just the day prior and pumped me up, and to all of the sponsors who make it possible for our team to let our talent shine on the course.

Up next: Ironman 70.3 World Championship in Chattanooga, TN. Time to get to work! 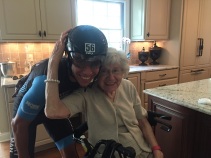