I charged my battery, but that’s none of my business

Can you write a race report if you only get 27% of the way through the bike before pulling out? Maybe this is more of a race blurb. Or perhaps I could write a sonnet. Well, whatever  this is, it’s pretty short and sweet, but plans moving forward are at the end so read along to get the latest!

This past Saturday morning, circa 7:03am, I knew I was in trouble. I’d just completed the swim in the cold, but way more bearable than expected, Lake Sonoma and run up the crazy steep, even longer than expected, transition to my bike.

I’d taken measures against the 45 degree air by putting a long sleeve jersey over my wet body.

I took my first few pedal strokes and my legs felt ready to roll, not to be taken for granted after a swim.

And then, after the small hill out of transition, I clicked my electronic shifter to shift over to “big ring.*” Nothing.

I clicked again and again and the bike wouldn’t shift. I, of course, charged the bike before the race, so I was shocked at the first sign of a low battery, a dead front derailleur. Especially after working with mechanics to diagnose and fix battery draining components weeks prior.

This was the internal thought process that led up to the decision to drop, for this blog post narrated by Morgan Freeman:

0.25mi: “Ok, the next two miles are down hill. Tuck, bomb, get to the bottom and get off the bike to change it with your hands.”

2.25mi: “I don’t think you can change electronic derailleur with your hands.”

2.26mi: (click, click) “Ok, time to spin your legs as fast as you can to keep tension and salvage a bike split and deliver yourself to the run.”

5mi: (going down hill) “Crap. Most of this course is downhill or flat.”

15mi: “Yeah, spinning like a maniac and watching the race pass you is kind of dumb. At this rate I’ll be done about 30min slower than expected. Last option, does this aid station have mechanical support? No? Time to pull the plug.”

And with that pun, I rolled with my teammate Brad KS who’d dropped with a chest cold, to the next town where a gracious family of spectators gave us a ride back to Santa Rosa.

I’ve learned a couple of reasons why my battery could have drained in 36 hours. I’ve put them at the bottom of this post.

While it’s a major bummer that when I was fit and ready, I wasn’t able to race this big local race against such a talented field and my teammates, I realize things happen and like the cramping at Oceanside a month prior, it’s all part  of racing. It was great to cheer so many teammates onto podium performances.

But since we’ve had a tough start to the season with duds at the first two races, I’ve made the decision to race Chattanooga this Sunday, May 21. We’ll have a lot of guys there, it’s the site of 2017 Worlds and it’s a chance to put this fitness to work. Hopefully I’ll be smiled upon by the racing gods for good race luck.

Thanks to everyone for the kind messages, sponsors for the support, Dani for being in my corner and all my teammates for the inspirational finishes to light that fire.

It was my second World Championship race in six days on Canadian soil and at Ironman 70.3 Worlds in, I came away with so many positive experiences and learning moments, that it’s tough to remember that I actually raced. Decently, at that. After a few days in Banff with my parents post ITU Worlds, I flew across country with my bike, rented a van and drove two hours to the beautiful town of Mont Tremblant, adding another notch to the “race travel experience” belt. Once there, I stayed at the Every Man Jack team house, which was not only convenient but made what would have been a solo race trip much more fun. not even a full week after my last championship race, I entered the race with one mantra, “all-day,” to emphasize hard, consistent effort.

The Swim: 30:44 Because my wave was so late, I got a really good warmup in and hit the swim with a “swim my race” attitude. That is to say, I tried to find clean water and not get caught up in the madness early. I eventually found rhythm and a group to swim with and posted a respectable, but not amazing swim split.

Transition 1: I was especially cognizant of being cold out of the water after ITU Worlds (I go into depth on that experience on that report). So I ran quickly to the change tent and grabbed my gear bag and ran with it as I put on arm warmers and my helmet.

The Bike: 2:22:19  I started strong and steady on this course with plenty of rolling hills. “All-day” was my mantra as I cranked out consistently strong watts. I was quite disheartened to see the wild amount of drafting coming at me the opposite way. Entire packs of athletes from earlier waves riding like a Saturday hammerfest group ride. Not cool. Not legal. Not a thing I could do about it, except try to ride even better. But my mantra became, “all day…?” As the watts started to trail in the last 10 miles of the bike. I was ready to start running.

The Run: 1:21:04 As usual, it was time to impact the race with the run. I felt like I was running on air on the first loop, which was really set up well for strong runners with false flats to power through. At the end of the loop (which was run 2x) was the madness of the ski village. The grade is almost comical and the cobble stones are rough. Equally as crazy as the road was the crowd – almost on top of you on either side of the street cheering like it’s a Tour de France climb. Truly special. Like the bike, I started to trail off my pace with 5K left and I knew I was in trouble when I couldn’t hang with the first guy to pass me for more than a mile of that 5k. As I hit the village the second and last time, my quads completely seized up and I began hobble-walking up the steep hill. Brian August came up behind me and got me running again with some words of encouragement and maybe a shove. We ran up together and slammed the ridiculous winding downhill. I don’t know how my legs didn’t lock up to the point of no return on that fast down, but I hit the chute for the final stretch with a couple of other athletes. One guy actually put his arm out and prevented me from crossing the line before him. Classy dude! I guess he really wanted 38th place…

The Result: 4:20:47 This result wasn’t particularly outstanding and neither was my rank. But I did my best, in the best 70.3 field in the world 6 days after doing the same at ITU Standard Worlds. I’m happy with the effort and with the experience.

Thanks: To family, friends and training buddies at M2. Big shout out and thanks to Team Every Man Jack. Had I not stayed with you guys, this race wouldn’t have happened for me. One race left, some familiar stomping grounds in Vegas at Silverman 70.3! 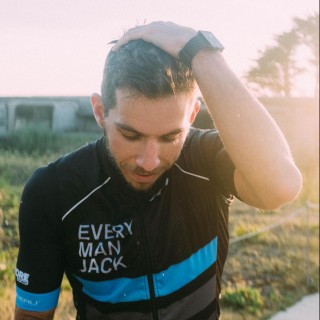 I'm an amateur triathlete and professional daylight maximizer, fueled by peanut butter and espresso. Here at mvtri.com I write about my training & racing as a competitive athlete, and the cool places around the world it's taken me.