A wise man once said that in Austria “the beer flows like wine and the women instictively flock like the salmon of Capistrano.” Or maybe he was talking about Aspen. In any case, I am in Zell Am See/Kaprun, Austria for the Ironman 70.3 World Championship and it’s  definitely beautiful: 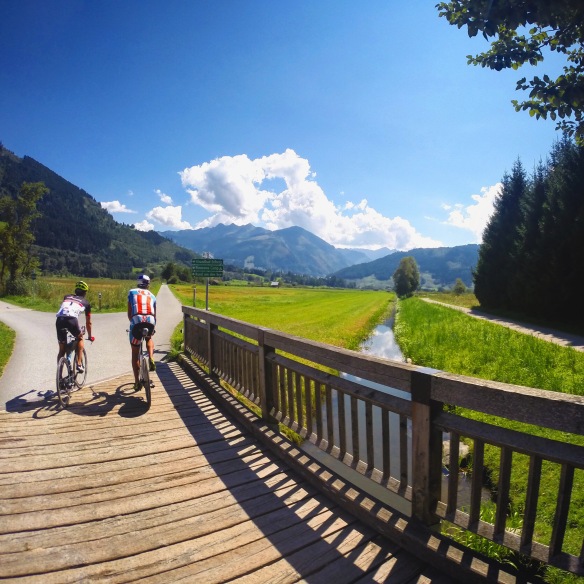 Trying to fiind some boring roads with Jesse and Kevin. Not working.

A lot has happened between the Muncie race and Europe. Some great, some not so great. And I get ready for Worlds by playing triathlon in this gorgeous place, it’s as good a time as any for a check in.

The year of gimp continues:

– In my Muncie race report, I mentioned hurting a rib in a bouncy house at the family reunion. Well, that bouncy house forced me to sleep upright for a week and not swim for two. You win bouncy house.

– The thing about injuries is sometimes you can over compenstate. Since I couldn’t swim, I overdid it on the bike and run and messed up my left knee, which scaled back running for a few weeks. Le sigh.

– Just when things started to come together, I had a freak crash four days before leaving for Austria. I was well taken care of during and after the crash and because Sports Basement and Felt keep Team EMJ’s bikes running fast, they overnighted parts and fixed my bike just before I took off. So race is on!

One of many ouchies. Roads are hard…

For those of you keeping track at home, that’s bike wreck #1, bronchitis from hell, rib, knee, bike wreck #2 in 2015. All you can do is understand that things happen, to everyone, and the most you can do is work with what you have on any given day to get better. Just make it work. In that light, I’m feeling good about Worlds on Sunday, because I know I’ve given it everything I’ve had this season.

On top of any of that, riding bikes in Europe is always something I’ve wanted to do and the rides I’ve done so far are incredible. I’m like a kid in Disney world (Epcot, obviously).

It’s been a crazy year since qualifying for Worlds last year at Silverman in Vegas. I’m really excited and super fortunate to be racing such high profile races over the next six weeks! Stay tuned for updates.

Signing off from Austria. Wait for it, wait for it…