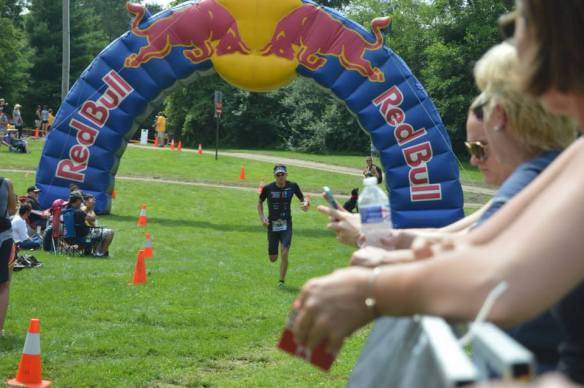 Ironman 70.3 Muncie was just the appetizer to an action packed weekend back in the Midwest. Almost immediately after crossing the finish line soaking wet, I was in my car b-lining for Cincinnati to celebrate my good friends Jillian and Dan getting married before turning around for a family reunion in Columbus twelve hours later. But unlike most appetizers, it was not small, expensive (thanks, GU!) and didn’t leave me wanting more. Nope, this was a very solid race for me that ended in a 3rd Overall finish driven by a my fastest ever bike split (by far) and a solid run.  Ok, so I kind of wouldn’t have minded more, 40 seconds behind 2nd, but 3rd OA was another exciting notch up the performance ladder! It went something like this…

The Swim – 1.2mi: (00:31:41) After a great warmup in what was essentially a lap pool off the lake’s shore, I began the swim loose and in control. Unlike most of my swims, this feeling never went away. I stayed on pace with a group of my wave and sighted like a champ after tons of practice each week with the purplepatch group. My visibility was incredible in the Roka F2 goggles with amber lenses as the green of the treeline and orange/yellow buoys really popped.  While this swim wasn’t my best time (and the course may have been long as times were up), I was on the perfect line, swam confidently and even surged past some guys as they wore out. I got to my bike feeling fresh, a huge mile stone for me!

The Bike – 56mi: (02:13:23) This is hands down my best bike split I’ve had in a half iron bike. In fact, I even bested my 40km time! After riding without power at St. George, I decided I was going to do this again and just ride hard and respond to the race. The night before I texted with Ritch Viola and he said something that stuck with me, “ride hard, but not breathless.” I thought I was doing this during the first 15 or so miles of the bike but once I saw Greg Grosicki of my team coming the other way and Eric Hawley of Indiana continuing to put time into me, I knew I had to take the effort up even another notch. I rode like it was an Olympic distance for the rest of the race and holy smokes did the Felt IA and Enve wheels respond – SOOO FAST. I train and race with GU Brew, a light hydration mix – never Gatorade, which was on the course. However knowing that the day was only going to keep getting hotter and the humidity would assuredly cause cramping if I wasn’t careful, I went through my GU bottles immediately and moved onto bottles and bottles of the sugary stuff. But with the hard effort and this foreign sugary liquid in my stomach, my gut wasn’t happy and kept…sending Gatorade back up and out. Gross! I know, but I tried to pay attention to it, while ignoring it, if that makes sense – be aware of the body to ensure it’s ready to go for the run, don’t freak out that you kinda keep puking.

The Run – 13.1mi: (01:19:42) Since I’ve never ridden that hard on the bike during a 70.3 and my legs felt a little crampy at times before forcing more Gatorade down the hatch, I wasn’t sure how this run was going to go. This course was actually very rolling and felt similar to Vineman with sustained, pesky grades. But I laced up my trusty Saucony Fastwitch 6s and found my stride quickly to run a focused first mile in 5:54. The next couple of miles slipped a bit as I felt my way through the open, rolling terrain. I took advantage of aid at every mile, keeping the core cool and beverages flowing. I started counting time to the guys ahead of me on the out and back, knowing that in my cases I could make up the time. But when I saw Hawley running the other way, I knew he was going to have to blow up in order for me to catch him – he was running well. I turned on the gas. When it was getting tough on the stubborn inclines, I’d put myself mentally in the Valley of Doom and just pretend that I was doing another repeat. It really worked and the training gave me familiarity and confidence to run strong. I started my final kick with about half a mile left and boy was I suffering. It’s a beautiful thing what the body can do when it only has to endure another couple of minutes – I was officially in zombie mode. I crossed the finish line with an embarrassingly loud grunt, before seeking out my parents and friend since age six, Nate who were there supporting the whole time.

Thanks – First and foremost to my parents. Not only for always being so supportive, but for being there every step of the way on race weekend, including my Houdini escape to the wedding – couldn’t have done it without you! Nate for waking up at four-something o’clock and schlepping all the way from Columbus to the middle of Indiana to watch me run around for a combined 23 seconds. To my Uncle John who did the same from only a slightly less far drive via Noblesville. Greg Grosicki for having me the day before the race at his place for home base as he showed me the bike course and hooked me up with his bike mechanic, Mike, at Greenway 500 – thank you! Mark Graham for just being a great teammate, even when I only saw you for a few minutes; and to you and Jessica for the great pictures!  The rest of my Team Everyman Jack teammates for always inspiring me – whether it was texts or just knowing what results were going to be clocked the next day at Vineman, I was jacked up (bad puns). And of course, to all of our sponsors – see the Mike Like’s page to see the amazing brands/products that I used to get me to, through and recovered from the race!

Here are some closing photos. Thanks for the support and keep on keepin on, all! 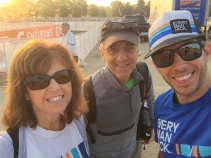 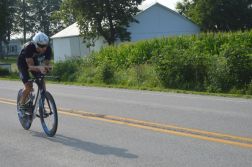 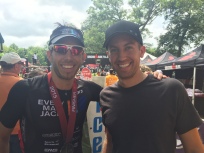 This dude drove for 2 hours at 5 am to watch me run around in Indiana! 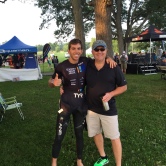 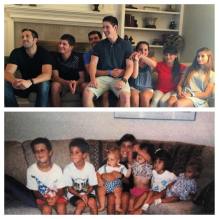 Family reunions are a great time to recreate old pictures. Until you’re the one holding the baby.

Homemade baked ziti. All of it, please. Italian reunions ftw!

When you bruise your ribs dunking on an inflatable hoop…