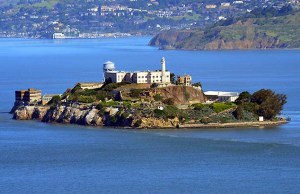 Nothing like dipping your toe back into racing with one of the most difficult short course races in the world, among one of the most competitive fields. Given my early year update, the epic Escape from Alcatraz seemed like a heck of a way to return. It was going to be tough to follow up last year’s podium effort, but in the end, I was happy to be back at the start line. 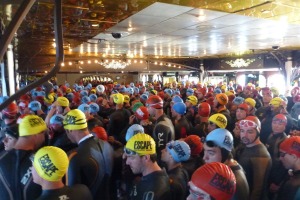 2,000+ athletes chilling on a boat, waiting to jump in the bay 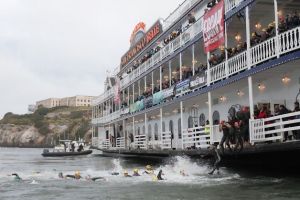 Nothing can match the badass

feeling of being out on that boat and watching the doors open to the fogged over city and rough waters off Alcatraz.

EFA continues to do an awesome job of organizing and expediting the process of getting 2,000 athletes to the start and off the boat in less than 6 minutes. It was great to race with my man Vince this year, as we chilled on the boat beforehand and discussed our master plan to swim, bike and run together (didn’t happen).

Hopping off the boat into the Bay is truly like something out of a war movie. Only ~20 people had jumped before me and still the water was white with foam as the ongoing flow of bodies churned the waves. As soon as I hit the water, I popped up and swam hard to catch some feet and to get out of the way of other jumpers. I was in a pack that I felt comfortable with.

As was the case last year, this didn’t last for long and before I knew it I was on my own. I entered some chop and for what seemed like 5 minutes, I remained in line with Fort Mason. I wasn’t going anywhere. I tried to find someone, anyone to swim with. Eventually I did, and “crossed the river” of the tide, working hard just to get on dry land. Like replay of last year, I got out of the water, looked around, and knew I had work to do.

Unlike last year, however, I felt good immediately on the bike. No cramps, all business and I started to hammer away. There was plenty of traffic to pass given how far behind I was, but I managed to keep steady, agressive watts.

After climbing and descending out of The Presidio, Sea Cliff and Land’s End, I hit descended to Golden Gate Park, where I was able to see just how far behind I was as guys I was racing against were already coming back.

The rest of the bike was just truly a hammerfest, aggressive flats and fly up the climbs.

After five months of biking like a mad man as I recovered from the running injury, I was happy to have easily the highest weighted average watts I’ve had in a race. 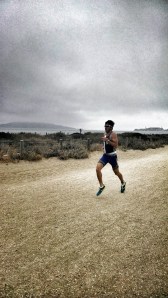 Great shot by Justin Green with ‘traz in the background! I of course had the blinders on, so I saw neither.

Pace seems to be directly correlated with elevation…

As I headed out on the run, I had two thoughts: 1.) run as fast as you can and make up as much ground as possible; 2.) it’s your second time running this hard in 9 months. As you’d guess, not only did this play out as a battle of short and long term prospects, but also between excitement and actual fitness level.

It does take some mental convincing to keep the foot on the gas when you realize how far out of the race you are. Never the less, I motored along Crissy Field until the climb to the Golden Gate Bridge. Just like the bike, it’s up, down, up, down. On the first down, I saw M2 standing in the same spot as last year. This was a really great pick-me-up and he let me know Vinny was doing well.

Only 400 steps made out of sand and boards up a cliff. Got this.

After that first down, it’s about a mile cruise on Barker Beach. Last year I felt so confident picking folks off through the sand, but this year it just felt so much…flatter. Not the sand, mind you. I didn’t even seem to find flat sand on the way back. As I ran as closely to the water line as possible, the seconds shrank between me and the beast, the monster, the beeyatch –  the sand ladder. And just like the beach, the sand ladder just felt slow. The pop from last year just wasn’t there.

Once you get to the top of the sand ladder, your climb is only half way over. So I took that as an opportunity to reset mentally and just drive the rest of the hill until I could let it fly home. I saw M2 again and as I let it fly through the Golden Gate Bridge common area, he rode his bike to the stair junction and let me know that I was running well and to catch as many people as possible.

So that’s what I did! Chin tucked, shoulders pinched I finished with a 5:27 mile and 5:12 pace for the last 0.6 mile. Not bad for a gimp! The finish at EFA is always great – lined with people and flags, grandstands, a nice long chute. And I knew my mom and Kathy D. (Vince’s mom) cheering us in. After taking a second to catch my breath and come to terms with how much like poo I felt, I gave Vince a big ole hug and high five for his great day. He really killed it on a huge stage.

There were plenty of takeaways for the season in this first race. The swim does need to continue to improve, but with lake or river swims for the rest of the year, I’d have a chance to see where my “non-Alcatraz” fitness was soon. My bike improved immensely since last year, and I attribute that to the Tahoe build and then not being able to run for months. And lastly, the run. I ran a couple hard sessions in 2014 and managed to nab the 6th overall run split. This built volumes of confidence for the year that I likely lost very little run fitness while gaining immense bike fitness. Silver linings, folks!

As always, thanks to M2 and the M2 Revolution gang, including Mike Cole who seriously Pimped My Ride for this one. Eric Gilsenan and the EFA crew for always putting on a world class, safe, well-run event. Amy Schmerl! for trekking across Marina Blvd. at way-to-early of an hour on a Sunday to support, along with everyone else that was out there. And of course, Momma V. for coming out to visit and always being excited to support the races.