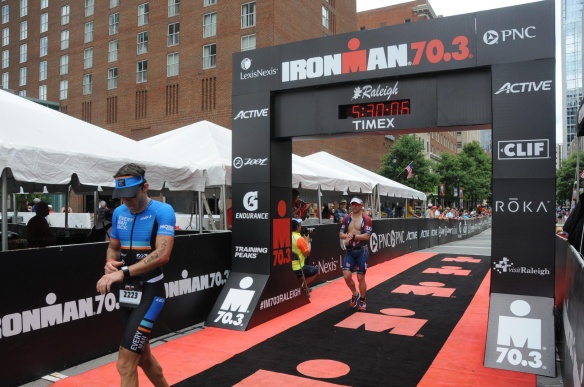 As I plodded along in the Raleigh sun, my stride shortened, shoulders hunched, pace crippled, I stopped running and ask myself, “What the %#@& is this?” The humidity had overcome me and to put it plainly, it really just sucked. I’d become weak and feeble in the fair Cali weather.

That was 2013, a training run during the wedding weekend of my friends Joey and Kerrie. Almost three years later, three things were the same and one was different:

A month earlier I raced in St. George and registered my first “Did Not Finish” after freezing on my bike in sub 40 temps and rain. After some thought, conversation with coach Matt Dixon and some full-court press by Meredith Kessler, I decided to call up Joey and see if they still had room for me. Operation “Bounce Back, Thaw Out” was on.

I was ready to put the fitness that I’d built for St. George to the test, only to be totally laid up for a week and a half before the race with the gnarliest of mega colds.

It’d be a lie if I said I wasn’t less than optimistic. But thanks to the constant reassurance of key individuals (thank you), I kept my head straight and toed the line ready to give my best, whatever that was on that day.

THE RACE, IN ANOTHER SUPER SCIENTIFIC CHART

The chart in my last post got some positive feedback. Obviously people value the in-depth analytics that went into it and really, just appreciate science. So I’ve brought it back, but in light of my beloved Cavaliers fighting for their lives in the NBA Finals, I’ve adjusted the scale a bit:

Top: You’ll notice the top end of the scale is this amazing human being. Animal. That’s when I’m feelin’ great.

Bottom: At low end the scale, we have a Draymond Green kick, which if you ask Timmy, Adams, Kyrie, KD, Russ or Brewer, can’t feel good. Zero = a size 15 to the gut on this chart.

There are 33 things I felt worth calling out in this race. You might disagree, so I’ve bolded the race-story critical ones. 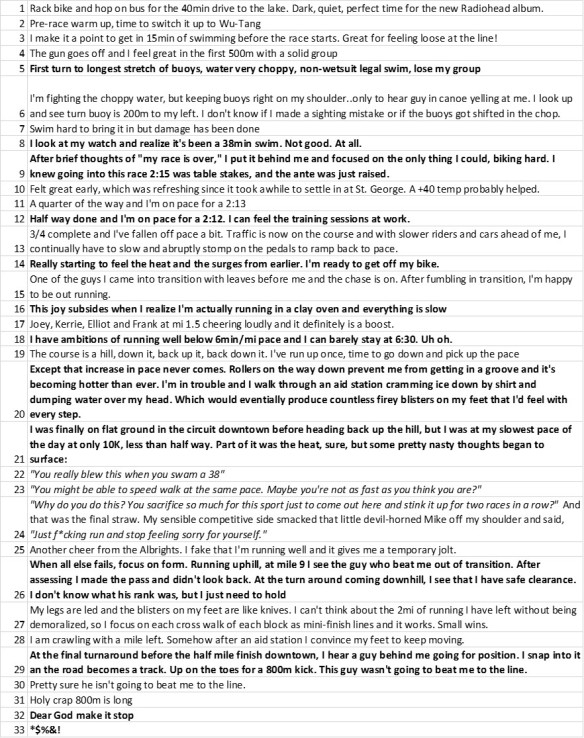 Post Script (33.1): It turned out the guy had started before me and wasn’t racing me for the same finishing time, but we really did push each other to the end.

As I gulped down my 4th bottle of water in as many minutes at the finish line, Joey and Kerrie came up to congratulate me. I was happy to have laid it all out there, but was a bit subdued and winged a bit about my slowest ever swim and run. It was then that Kerrie pulled out here phone, refreshed the results and told me that I won my age group by 2 seconds.

I was genuinely shocked. Because of the wave start, there was no way for me to have known this. I seriously thought I tanked. It wasn’t the day I know I could have, but it was a hot, long day for everyone out there and I managed to pull together a division win with focus on the bike and by sheer will on the run.

ALWAYS A LESSON TO BE LEARNED (OR REINFORCED)

Had the last 800m not been a track meet, I likely would not have gotten the division W. I learned something that day. I guess I should say, I re-learned a lesson that each race I’ve ever done has taught me. I always have more. WE always have more. That 2 seconds was the difference between me pulling up and coasting to the finish line instead of out-sprinting. The difference of being focused in transition 1 vs. being rattled about my swim. The difference of focusing on gearing and hiding from the wind on every one of the 56mi cycled between the lake and the city. The difference between listening to the reasonable Mike on my shoulder at 7min/miles and swatting away Devil Mike.

Whether in a race or in life, when you think you can’t go any further or any faster, turn off your mind and do it. You’ll surprise yourself when you in fact do it. And pain only hurts.

And now, I return to earth with one of my patented “Worst Race Photo-Taker of All Time” gems to kick off some race pics: 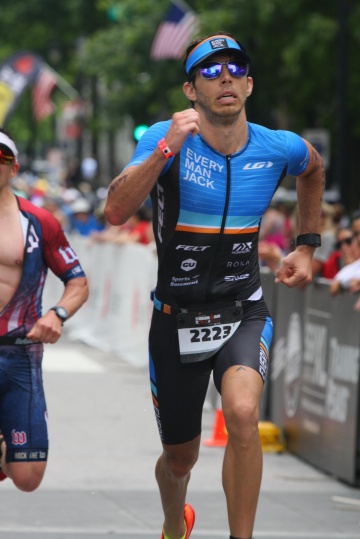 The final sprint, as ugly as it looks. 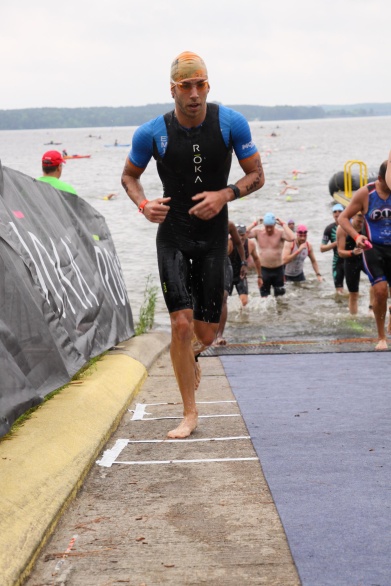 The Roka Viper swimskin gave me a fighting chance in the non-wet suit swim. The Roka R1 Light Amber tint goggles were perfect for a cloudy morning.

A happier time on the run. Floating in my Saucony Type A5s. QUICK. Boco visor kept Carolina sun at bay.

Massive thank you to team EMJ, sponsors, purplepatch coaching, the Albrights and all my friends and family for your support! Definitely a team effort to bounce back from St. George.

See you all at Vineman! -MV